What got us excited at ReactEurope 2018

Last week Despark visited the awesome React Europe conference in Paris. It was an amazing event that really inspired us. For the last few years we’ve been livestreaming every edition with our eyes glued to the screen and it was great that we got the chance to visit in person. We learned new things about the tools and libraries we already use and love, got a sneak peek of what the future of React holds and got even more enthusiastic to experiment and push the boundaries of what’s possible. We are excited to share our favourite talks with you!

One of the most anticipated talks was definitely the one from Sunil Pai (@threepointone), for which there wasn’t any information on the schedule, apart from its starting time. One of the “OG hipsters of React Europe”, he gave a rundown of the projects he has been involved with, the ideas behind them and his genuine love of open source software (and Kent C. Dodds). With many honest insights about his journey in learning to program, his talk was a call to arms for building next level tools and challenging established practices. One of the best examples of how writing less code and improving developer experience gives us more capacity to actually think about the user!

Another crowd-favourite was Vincent Riemer’s (@vincentriemer) talk called “Bridging React Native Back to its Roots” introducing a “little side project” he has been working on. Getting the itch for giving conference talks after introducing his web-based TR-808 drum machine at React Amsterdam, he began looking for ideas on what to do next. Bringing the perspective of someone coming from the web to React Native, he started experimenting with porting the Yoga layout engine in the browser and then running React in a web worker. The result? One of the biggest announcements during the conference — the React Native DOM library. Exploiting a multithreaded architecture similar to React Native, using Yoga for consistent layout on the web and the Metro bundler for better developer experience are just some of the highlights of this project. While still very, very experimental, it could potentially be a big step for moving the web forward and people have already started to build tools on top of it.

There were two talks focused on ReasonML — one by Cristiano Calcagno (@ccrisccris), the co-creator of ReasonReact, and one by Jared Forsyth (@jaredforsyth) from Khan Academy. We are very excited about Reason and have already started introducing it into some of our existing codebases. The first ReasonConf happened just a few days before ReactEurope and more and more people are recognising the benefits of using Reason. Christiano Calgano showed some amazing demos and explained how local state makes it easy to compose components. Jared Forsyth’s talk “Type-safe React Native with ReasonML” was very honest, focusing not only on the many positive sides of Reason, but being very clear about some of the negative ones too — the tooling that is still rough around the edges, the small (but growing) community, etc. 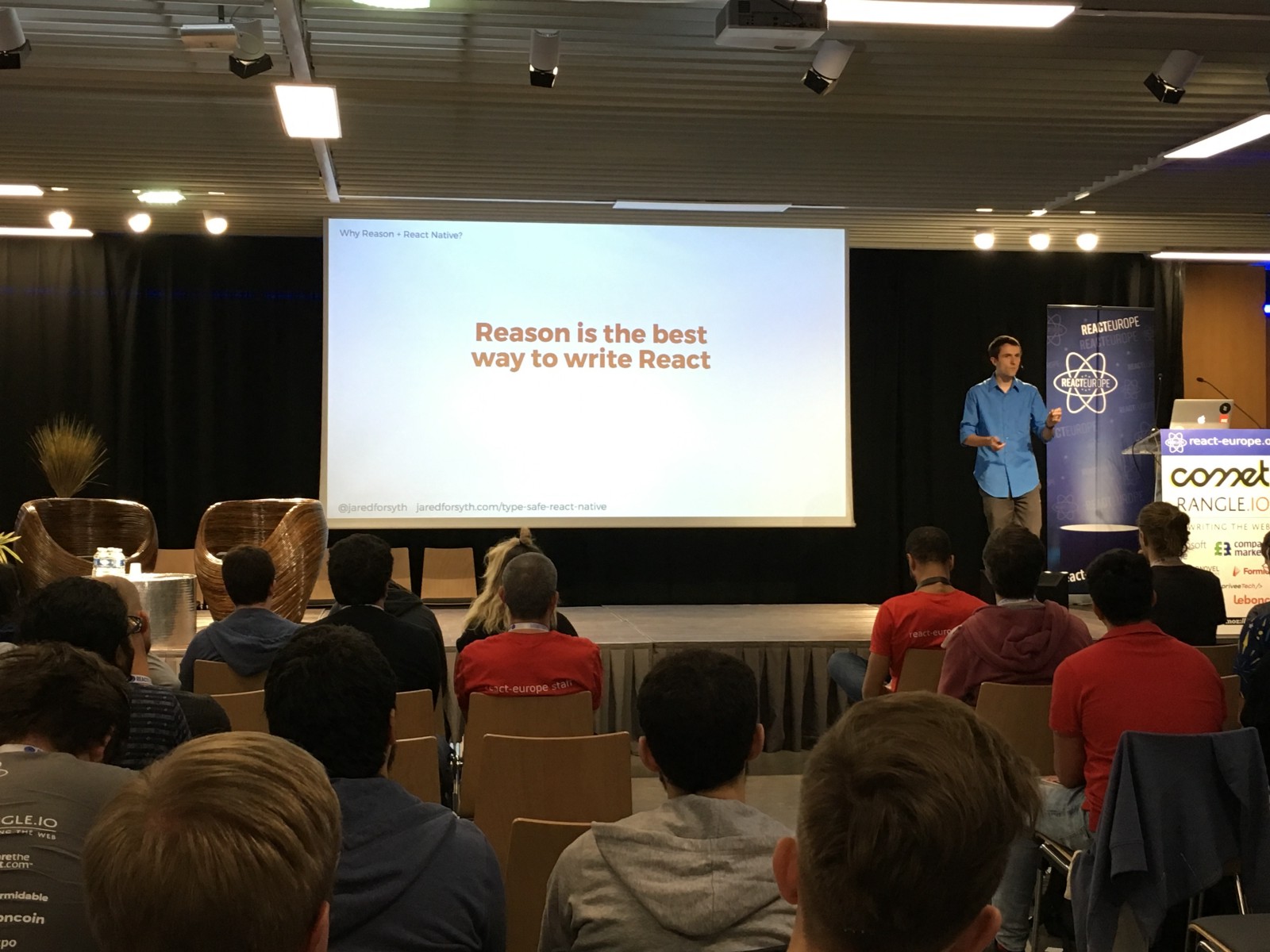 Nevertheless, the future of Reason is very bright, and Jared showed us some awesome things that are in the works, for instance reason-apollo giving the developer type-checked queries. He also demonstrated the cross compilation possibilities which could lead to reduction of runtime performance costs for React Native apps, dubbed “Really Native React Native” 😉

If you’re interested in Reason, aside from their great website, we recommend Nik Graf’s excellent egghead course and of course Jared’s podcast Reason Town.

If you love GraphQL as much as we do, Peggy Rayzis’ (@peggyrayzis) talk “A Journey Through React Apollo” is a must. It was filled with many examples of how the folks at Apollo are always trying to stay ahead of the game to make sure that data management for React application is pleasant and productive. Starting with a “history lesson” of how Apollo evolved since its initial release, we got a taste of what’s coming next. Building on top of the features demonstrated in Dan Abramov’s “Beyond React 16” talk  from JSConf Iceland, Peggy’s demos showed how the recently merged Suspense feature works with react-apollo, making async rendering a breeze. We love using Apollo in our projects and can’t wait for the exciting features that will be available soon!

Ives van Hoorne’s (@compuives) talk “A year of CodeSandbox” was one of the funniest, most personal and honest talks during the whole conference and we really loved it! CodeSandbox is an online code editor for web applications and Ives told us about his journey building it and how his idea evolved.

Building a beginner-friendly online editor, adding collaborative features, encouraging learning and discovery are not easy tasks and Ives shared great insights about the things he learned along the way. The talk was accompanied by some very exciting announcements as well — CodeSandbox Live, the real-time collaboration mode, is now free for everyone and support for ReasonML is coming soon.

We are really glad that we were a part of the 2018 edition of ReactEurope and we are already looking forward to the next one! Videos from the conference are on youtube: make sure to watch them all, not just the ones mentioned above — every one of them was really, really good.

If you’re as excited about React and all the new stuff around it as much as we are, say “Hi” and let’s talk.

We will be hosting a meetup in Sofia with Aaron Greenwald (@aaronjgreenwald) on the 28th of June! Join us to hear his talk on “React Native Code Reuse: Architecture that Works”, updates coming soon.